Did Latinos vote in First Dominican-American Congressman? Is Charles B. Rangel Out?

Did Latinos vote in First Dominican-American Congressman? Is Charles B. Rangel Out? 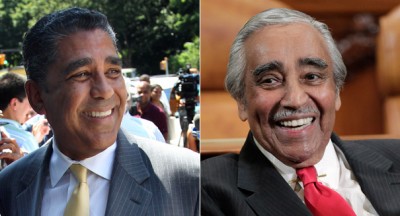 Despite State Senator Adriano Espaillat putting up yet another intense challenge, but it seems like New Yorkers have made their decision and have decided to grant Representative Charles B. Rangel the privilege of keeping his seat. Last night, Rangel appears to have been voted into Congress representing the the 13th Congressional District for another two years.

Since 1971 and for more than 40 years, Rangel has served a 22-term as the voice and face of Harlem politics. Because of his notable years in service, Rangel is expected to keep his congressional seat for a 23-term in November’s re-election.

“Who in the heck can possibly say that I’m not the best qualified to bring back what is best for my community, for my city, my state, my country,” said Rangel in an interview with 1010 WINS on Monday during his final campaigning moment.

Several hours after the polls closed last night, reports slowly came in where news reports were stating that Rangel had snagged the primary. According to the polls, Rangel held a lead of about 47% against his opponent State Sen. Adriano Espaillat who held 44%.

With the numbers seemingly coming in for Rangel, the Congressmen took the stage at 11:15pm—allegedly against the counsel of his political advisers—and spent 47 minutes speaking to his crowd of supporters in a recreation room at Taino Towers located on E. 123rd.

“Most of you don’t remember what happened to Dewey when he declared victory—so I don’t want to do that,” Rangel joked, referring to the 1948 Presidential race when New York Governor Thomas E. Dewey declared himself the victor against the true president Harry Truman.

However, Rangel did not have to worry about a slip-up in celebrating early because 35 minutes after joking about that election error NY1 News declared Rangel the victor.

Around midnight, with close to 99% of the votes counted, Rangel stood before his followers and announced his victory.

“We have fought this fight, we have brought our community together. One thing I can be clear about now: Our community in the congressional district of the 13th District, they have won,” Rangel said.

“As we learned in 2012, every single vote needs to be counted in this race. Given the thousands of votes outstanding, the people of Upper Manhattan and The Bronx deserve a full accounting of every vote to achieve a complete and accurate tally in this race,” said Espaillat, in the statement released at around 1a.m. in the morning.

Although Rangel celebrated his victory, at 6 a.m. on Wednesday morning the race was deemed “too close to call,” according to the Associated Press. The reason why the race was still too early to call is because there were an undetermined number of absentee and provisional ballots that yet to be counted.

Although the last few months was a rematch of sorts due to the results of the 2012 election between Rangel and Espaillat, many political analysts believe Rangel would be ousted this time around.

One of the well-known political figures in American politics, Rangel has become one of the voices of this nation’s black politics. In his nearly 44 years in office, Rangel is one of the longest-serving member of the New York delegation and in that time he was a founder of the Congressional Black Caucus.

Although Rangel has paved the way for Black Americans, many have wondered if Rangel had stayed in office for far too long considering the demographics of Harlem has become more diverse.

Over the years, the 13th congressional district consisting of Harlem has changed from formerly being a majority Black district to one where there is a 52% of Hispanic living in the area. It is because of this demographic shift, political observers believed that many Latinos would come out and vote for Espaillat.

When Rangel announced his intention to seek re-election last year, Espaillat announced he would take up the challenge to take Rangel’s seat. According to Espaillat, Rangel had stayed too long and it was time for new leadership in the district.

Also, another reason Espaillat and political observers believed Rangel would lose his seat is because some see that he has lost his much of his influence due to his political career being inflicted by scandals.

Because of his scandals, Rangel was reported to have lost much of his power in Washington. However, former president Bill Clinton, House Minority Leader Nancy Pelosi, and House Minority Whip Steny H. Hoyer, among others seemed to support Rangel since he secured their endorsements and campaign appearances. So, with some in Washington and most of the voters here in New York City voting for him it seems Rangel have been giving another chance.

So far, State Senator Adriano Espaillat has yet to concede or release any statement regarding news reports that Rangel has claimed his 23—according to the incumbent representative—and final term as Representative for New York’s 13th congressional district.

DANAY SUAREZ TO DEBUT AT 2014 LAMC
Bones Found and Human Bodies Created; But How?