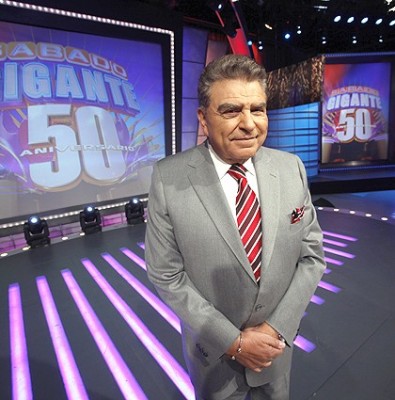 Don Francisco took his final bow last Saturday after 53 years of being on television.

The renowned host of Sábado Gigante was a platform that promoted many of Latino superstars today. Popular in both U.S. and Latin American households the show held the highest record for being the longest running variety show with Don Francisco, who real name is Mario Kreutzberger, as its only host.

“A show is not done by one person,” said Don Francisco, during his farewell speech to his audience. “It is done by a team, by many people, many of whom you do not see, you do not know who they are, but they work hard, they put their hearts into it and their talent into it”

The emotional final show included numerous cameos consisting of political figures and celebrities who appeared to say their own personal goodbyes to both Don Francisco and the show itself.

Among the cameos was President Barack Obama and his wife who praised the host for his success. Meanwhile stars like Gloria Estefan, Enrique Iglesias, Shakira, Marc Anthony are just a few Latin American pop stars who wanted to extend theirs thanks for the host aiding in providing another platform for them to launch their careers.

In a video message recorded for Don Francisco, Marc Anthony recalled being on the show for the first time in 1993.

“That was a very important moment for me,” Marc Anthony said, “because I was young and insecure and I felt as if I had graduated, and then I was surprised to find out that my father was there.”

“He has to be so proud of what he accomplished,” Music producer Emilio Estefan Estefan said, regarding Don Francisco as not only his best friend but a strong and familiar figure in the Latino community, “It’s an end of an era. When we don’t see that show on Saturdays, it will be hard.”

After the final show, Don Francisco told a group of reporters that although the show was over he would still continue to work in media, but gave no details as to what his plans are.