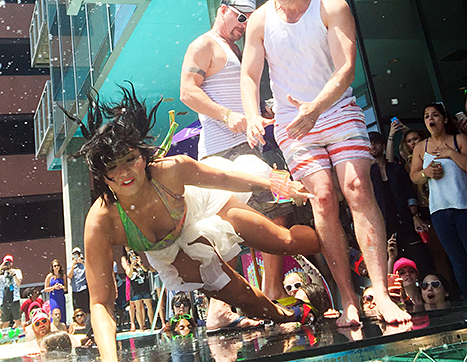 Demi Lovato’s summer is starting off with some and highs and some dead dropping. While out prompting her latest hit “Cool for the Summer” which is off of her yet untitled and soon-to-be-released album and has recently hit #1 on Itunes, Lovato fell on stage while performing her song about a wild summer romance.

On Sunday, during Independence Day weekend, while at an event in held on the roof of Los Angeles’s WaterMarke tower the former-Disney star nearly fell into a pool while performing on a stage built over it.

While jumping around and celebrating both the start of the summer as well as her single “Cool for the Summer” the singer nearly got soaked while performing the song. Instead, she just fell and face-planted the stage before the audience—and the world itself thanks to phone cameras and social media—while performing her latest pop hit.

“#NOTCoolForTheSummer #F*ckIt,” tweeted Lovato on her Twitter along with the video and added, “Well… It’s not a tour without busting ass!!!!!!”

But the fall didn’t stop Lovato. Getting back up on her feet, Lovato continued her performance and ended up jumping into the pool on her own accord.