Heighten Racism of the 2016 Presidential Elections

Heighten Racism of the 2016 Presidential Elections 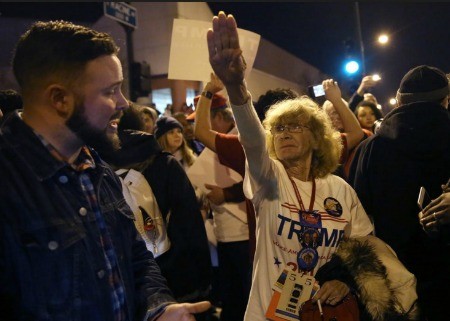 Initially, when it came to the 2016 Presidential Elections I wanted to forego discussing anything that was going on politically in the country.

Yes, I know that to do nothing means that I am not privy to make any comments when something unsavory results due to my inaction. However, my choosing to be neutral when it comes to either engaging friends in conversations or when it comes to thinking about what to write for LatinTRENDS I wasn’t straying away from the elections because I didn’t know what was going on but I knew what was coming and I wouldn’t be able to stomach it.

When I look at the current contenders battling it out within the United States of America I do not hear the promises being made by Bernie Sanders, Hillary Clinton, Marco Rubio, or Ted Crus, but what I do hear is a monolith of ignorance, bigotry, and hatred being tossed about so loudly that it makes an air raid siren sound no louder than a miniscule mouse.

I wanted to abstain from talking about Donald Trump and his traveling circus of hatred—also known as his campaign trail to become our 45th President. I wanted to avoid it because it is impossible to remain opinion-free lately when it comes to anything Trump.

However, what once seemed to be an impossibility is so slowly becoming possible: Trump could very well be our next president. And since this may be an actuality, I am breaking my “if you have an opinion don’t write about it,” rule in order to discuss what is really going on within this election season.

This election doesn’t appear to be about politics anymore, in fact it appears solely to be about one very problematic social issue within our society. This election is showing a deep-rooted issue in our society that has been overlooked for far too long and has resurrected a monstrous sentiment from our past: Racism.

Since making his announcement that he will run for president, Trump has been steadily making this country become accustomed to his irrational and racist rhetoric regarding those he views as being opponents against making “America Great Again!.”

The one thing these opponents appear to have in common: they are all non-white.

Trump’s rallies have become a hotbed of racial aggression for those viewed as non-whites thanks to Trumps continued degrading of Latinos, Blacks, and Muslim citizens living in the country. His continued condemning and blaming of non-whites as to being the reason why our country isn’t “great” has resulted in his rallies being attended by white supremacist as well as members of the Ku Klux Klan.

Trump has even become endorsed by the likes of David Duke who is the former Grand Wizard of the Ku Klux Klan stating that Trump is the only candidate who is “best of the lot.”

The appearance of the racists showing up at Trump’s rallies eerily reminds me of footage taken throughout the 50s & 60s in-which non-white civilians are verbally and physically assaulted by whites around them solely because of the color of their skin. And sadly, recent captured footage only adds to the sickening feeling the above images illicit.

Earlier this month, at two separate Trump rallies young black students were forcibly removed from the rallies. They were yelled at, they were shoved, and some were even physically assaulted after Trump ordered the crowds to remove any potential disruptors. These students weren’t merely thrown out because they appeared to be possible disruptors but were removed by the largely white crowd because they were Black.

The incident became a viral showing a group of men, some reported to being associated with white supremacist organizations, physically shoving and yelling at young woman named Shiya Nwanguma as she was led out of the rally.

Since this incident numerous protests have sprung up—more so than before originally led by Black Lives Matters movement—in order to show that while some are accepting Trump’s message there are a great deal of others who are not.

Last Friday in Chicago, protesters stood outside a Trump rally being held at the University of Illinois at Chicago Pavilion and because of the large presence the Trump rally was cancelled thus leading to a confrontation between Trump supporters and protesters outside. One moment from this event will forever be a part of history occurred when a Trump supporter encountered a protester outside.

In the image seen above, Birgitt Peterson—aged 69—is caught giving the “Heil Hitler” salute which has become a gesture linked to Nazism. Michael Joseph Garza, who appears in the picture, took to his Facebook page to write about the incident which has received its own viral firestorm.

According Garza, he was trying to help Peterson and her husband along with other Trump supporters leave the Pavilion by waving his hand through a clear route made for them. After indicating for Peterson to go, Garza stated that she responded with:

“Go? Back in my day, you know what we did—” And then ended the exchange with the Hitler salute.

Now, Peterson has refuted claims that she and her husband or Nazis or White Supremacist—she’s alleges that the gesture was merely her attempt to correct protests who equated Trump to Adolf Hitler by showing them the difference. An attempt she clearly failed in doing.

The fact that he attracts racists and bigots doesn’t appear to bother Trump, in fact it seems to only empower him because as Trump has noted on several occasions those who attend his rallies are either passionate or fed up with the state of the country. And in-response to the aggression his supporters have displayed, well according to Trump that’s the protestors fault. So, while it is easy to blame Trump for the recent racial tensions that is currently unfolding in this country he is not to blame.

I recently saw a meme which stated—to a certain degree that—the racial issue in this country is equivalent to the lights being turned on in an apartment and spotting all the bugs scurrying away because of the light being cast upon them. Basically, the meme is addressing how 1) the issue of race is only a problem for most until a light is shined onto it and we see how disgusting it is because it is right in our faces and 2) if it continues to go unnoticed it will lead to a greater infestation that could possible become far too great to stop.

The racial issues in this country has been on a steady rise; it has been sitting in a boiling pot for a good long while now and it is beginning to boil over to a point that everyone can see just how problematic it is.

The campaigning for the 45th presidency has shined a huge light on how the continued ignorance and lack of addressing this country’s issue regarding race has become more troublesome. If this issue continues to go unchecked, if we do not find a way to address it, and we permit an individual like Trump or a candidate who will not resolve this ongoing issue then the notion that we are all created equal is nothing more than dead, poetic words.