“Home” Father and Daughter Singers are Back! And singing for a personal and social cause!

“Home” Father and Daughter Singers are Back! And singing for a personal and social cause! 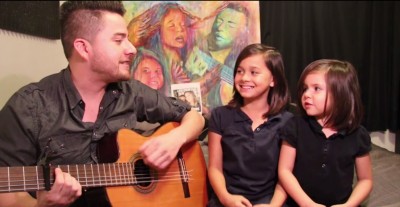 Four years ago, Jorge Narvaez and his daughter Alexa became internet sensations due to their cover of Edward Sharpe and the Magnetic Zeros’s “Home”. In 2010, the father and daughter singing duo uploaded their late night jamming session to his Youtube account which garnered the pair instant national TV attention on both America’s Got Talent and on Ellen Degeneres talk show.

And now the duo is back online, this time joined with a new member and singing the same song for a very important cause.

Joined by little Eliana, the single father’s other daughter, Jorge and Alexa sing the song about founding a home with a loved one for Jorge‘s mother—the girl’s grandmother—Esther Alvarado Valdivia. This jamming sessions holds a deep personal experience felt by most families because the song is a message to the United States Government asking them to let Valdivia come home.

Prior to the first separation, during the summer between his graduating high school and entering college, Jorge recalls how after his then girlfriend welcomed their first daughter, Alexa, and later they would welcome their second daughter, Eliana, in 2008 just after Valdivia was deported greatly impacted his life.

“It took a toll on me spiritually, mentally and emotionally, and my grades and stuff,” said Jorge, describing the emotional turmoil he experienced losing his mother at such a precious time, “It tore me and Nancy [the girl’s mother] apart.”

According to a petition on DreamActivist.org, Jorge’s mother’s story is told for all who visits.

“For people like Esther Alvarado, there is no way to come home. In 2007, Esther tried to come back the ‘right way’ by having her husband and the father of her children petition for her permanent residency only to have her application denied…After applying for re-entry and for permanent residency, the U.S. government denied her petition. Esther came to the United States in search of safety the only way she could, and it is in Tijuana, where she currently lives, that her life is threatened by extortionists on a daily basis. It is also in Tijuana that Esther suffers from depression for being separated from her family.”

According to the Jorge, Alexa, and Eliana Narvaez fan page on Facebook and Youtube, on April 11, 2014 at 4am, Valdivia was:

“Driven to San Diego tied up in chains, denied breakfast and with swollen hands, she was told the bad news that her Asylum case was denied. It seems like having a US Army Veteran son, the extortion calls and fear for her life is not enough proof that she needs to be here in the US with her family. Tired and hungry, she was crying to me over the phone contemplating her arms were so swollen and why is it so hard for a mother to be with her children.”

The deportation of immigrants is on a rising climb and is estimated to be nearly over two million. A growing issue in this country, many supporters of President Barack Obama are coming out against him calling him the “Deporter-In-Chief” due to the shocking number of immigrants being deported.

Due to immigration reform being in a standstill, many Latinos are coming out in protests, online petitions, and videos asking the president to do something to end deportation that is continuing to separate and burden families like Narvaez.

“No one should be forced to live away from their loved ones,” Jorge writes in the post with the updated video, “If you believe in family reunification, please support us by signing the national petition to bring them home and staying informed by following the National Immigrant Youth Alliance.”

And after his mother’s imprisonment, Jorge released another heartfelt statement regarding the escalating incident.

“The only way now to release my mother is to get more POLITICIANS involved. If you could please push this message out to a politician and anyone in the NEWS that can spread the message please do so. My mother is running out of time. Some of the children and women in hunger strikes are running out of time. I’m really scared. I don’t know what else to say but to pray for a solution. Please spread the word. President Barack Obama, you need to wake up and see what you’re doing to families across the United States. The same families that voted for you are the same families being destroyed.”

Currently detained in San Diego, Vidivia is imprisoned with 150 families trying to come back home. And this number only represents a small percentage of families that hang in limbo because of this country’s current immigration policy that does more harm than good.

Also, help the Narvaez family by signing this petition and read more stories and help other families who are trying to unite with their loved ones imprisoned and slated for deportation.

You can check out Jorge, Alexa, and Eliana Narvaez’s Home cover:

One Week Later: Did Latinos come out for Obamacare?
Cutbacks with Limes, Really?
Translate »