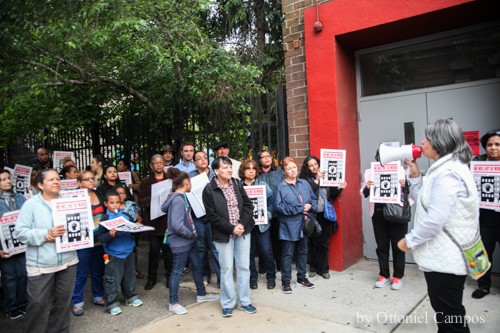 You might not have heard – only because most of the New York media highlighting the popular Brooklyn neighborhood of Williamsburg usually report on bars, restaurants and the must-go-to hipster events in the area – are not reporting on the people, organizations and small Latino businesses that are being forced out.

Yesterday, community leaders and Hispanics of all ages rallied together at Public School 19 in Brooklyn to campaign against gentrification. Groups of people, led by the community-based non-profit organization Southside United HDFC, marched through a section of Williamsburg known as Los Sures (The Southside).

“I’ve been living here since 1975,” said Concepcion Bosque in Spanish at the rally. “I lived here when this neighborhood was dangerous and I didn’t dare walk the streets at night alone. Today [the neighborhood] is full of flowers and beautiful new buildings… and now they want to kick us out,” said Bosque,the director of the Family Child Care Program.

“Together we will never be defeated. Here we are and we are not going.” 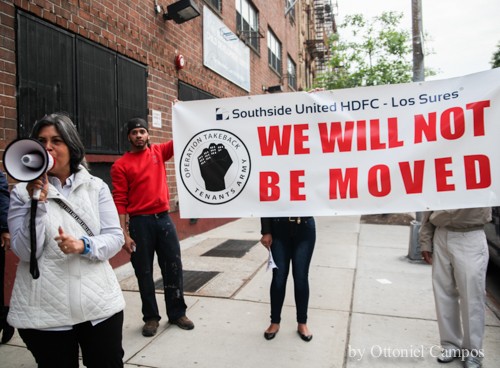 According to Bosque, the neighborhood has lost several community centers. And she worries that the neighborhood will lose Nuestro Niños Child Development Center, an established daycare, and preschool in Williamsburg that has been around for more than 40-years.

“Our lease has been overdo since January,” Bosque said. “To lose a center like this is not only losing a place for our children, but it’s to lose our community. It is up to Mayor Bill de Blasio to step up and renew the lease so we can continue providing for our community.”

The marchers also stopped in front of a building on South 3rd Street, where they claim that the landlord has been neglecting the building’s needs but not the tenants’ checks. One of the speakers encouraged marchers and others to create tenant associations in their respective buildings to combat slumlords and abusive landlords. Marchers responded with a chant in Spanish “Together we will never be defeated. Here we are and we are not going away.”