Mayor de Blasio vs. the NYPD Pt.II: The tension continues

Mayor de Blasio vs. the NYPD Pt.II: The tension continues 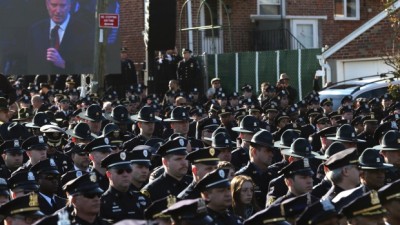 Yesterday, mourning continued in the city as Police Officer Wenjian Liu was laid to rest. During the service, hundreds of police officers were in attendance to honor their fallen brother-in-blue along with Mayor Bill de Blasio. Unfortunately, the mayor’s appearance was not welcomed.

With tension still present between the New York City mayor and the New York Police Department, officers decided to turned their backs on the mayor as he gave his eulogy showing reconciliation may a far ways off.

At the funeral service, Mayor de Blasio tried to bring an end to the tension between he, the city, and the NYPD.

“All of our city is heartbroken today,” said de Blasio, “Let us rededicate ourselves to those great New York traditions of mutual understanding and living in harmony. Let us move forward by strengthening the bonds that unite us, and let us work together to attain peace.”

However, his words may have not been accepted by the police officers in-attendance.

The tension began on December 21st, 2014 when Officer Liu along with his partner Rafael Ramos were struck down by Ismaaiyl Brinsley who claimed he was taking revenge for the murders of Michael Brown and Eric Garner at the hands of law enforcement last summer.

Despite being requested by Police Commissioner Bill Bratton to give the eulogy, the mayor was shunned by officers once again who decided to use the funeral services as an act of protest against the mayor whom they feel isn’t on their side.

A retired-police officer who simply wanted to be identified as Nick expressed his disdain for the mayor, “The mayor is not on our side. This is like the 70s, when cops were getting killed. We are going backwards.”

An interesting choice of words, “We are going backwards,”

In a sense we are going backwards, but not in the way this retired-officer thinks.

For decades now, there has been an increasing issue in New York City when it comes to the interacting between law enforcement and people of color. From Black to Latinos, this country has had increasing issues in-regards to the stop-and-frisk encounters between officers and civilians. In more incidents, civilians of color are injured more than police officers themselves.

Knowing this, and being a father to a Black son, Mayor de Blasio cast a spotlight on this issue among the NYPD when he made comments during his campaign when he revealed that he has had to instruct his son on how he should engage police officers if he ever crosses path with them.

For some, mostly those who are in-association with the NYPD, de Blasio was acting against the NYPD and casting them as “villains.” But was he? Was the mayor simply trying to touch on an issue that needed to be addressed before it implodes into a deeper problem, like the Garner situation that would occur after his election?

Is it going backwards trying to end an ongoing trend within a social institute like the NYPD that is a known problem?

Former Mayor Rudy Giuliani seems to be just one agitator in the current tension between the NYPD and the city. However, it was during his administration where the current state of tension seeds was first planted. Under Giuliani policies like stop-and-frisk took precedent in the NYPD and saw the acceptance of young Black and Latino men being harassed by law enforcement simply because they were suspects due to their skin color or the way they dressed.

According to the former mayor, de Blasio could get back in the good graces of the NYPD if he admitted wrong for not denouncing the protests that has swept across the city after the grand jury verdicts regarding Brown and Garner and the failure to indict their killers.

“Mayor de Blasio, please say you’re sorry,” said Giuliani, “He created an impression with the police that he was on the side of the protesters,”

Giuliani has even connected the conflict between de Blasio and the NYPD to his “allying” with Reverend Al Sharpton who he labels a “police hater.”

“When he loses Al Sharpton, maybe then he can have a better relationship with the New York City Police Department…If you would like to have a poster boy for hating the police, it’s Al Sharpton.”

While Sharpton has been known to be very vocal when it comes to the NYPD he isn’t a police hater, but someone who doesn’t want the injustice or criminal acts committed by those who are supposed to represent the law go unnoticed. It is the agitating comments like the ones made by the former mayor that doesn’t end a conflict or tension but furthers it along.

Police officers are allowed to voice their disagreement with the mayor, but the way it is being done not only dishonors the fallen police officers but shows citizens of the city and those afar how cops place themselves above others when it involves such issues as racial tension.

“He is the mayor of New York, he was there representing the citizens of New York to express their remorse and their regret at that death,” said Bratton, and on the tension between the two, “I think it’s probably a rift that is going to go on for a while longer. However, we will be making efforts to sit down and talk with the union leaders in particular to deal with their issues.”

At the funeral service, a high-ranking police officer who didn’t join in turning his back on the mayor said that his fellow officers were upset with him for not joining him. When he was asked why he didn’t join them, he responded “Cause I was here for Liu and his family—not the mayor. I don’t like the mayor or what he stands for, but I agree with Bratton that it’s not the place.”

And that is exactly what it was supposed to be about.

The constant show of aggression by the NYPD against the mayor doesn’t truly help their cause. The show of disrespect adds to the already damaged reputation of the NYPD. When they choose to ignore the mayor, and during a funeral service of all places, it shows what many New Yorkers feel about them: they will do what they want, and not care about the repercussions because it doesn’t exist for them.

Yes, police officers’ lives are constantly in danger as they protect this city—New York City—and other cities or towns across the country. However, the current behavior and the constant refusal to see that there are those within law enforcement who present officers in a bad light causes incidents were people react negatively towards cop causes such strain between the community and officers who are sworn to duty to protect them.

On Friday, before Sunday’s funeral service, Bratton released a statement to officer’s under his command that, “A hero’s funeral is about grieving, not grievance,” something that many officers in-attendance refused to follow.