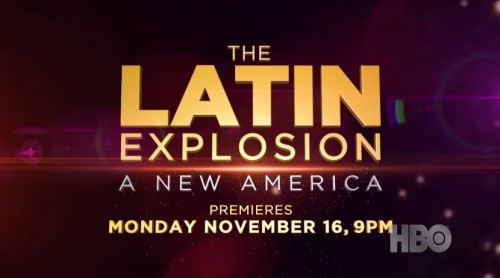 Jennifer Lopez, Eva Longoria, Ricky Martin, Sofia Vergara, George Lopez are just a few of the Latino superstars who will appear in a new HBO documentary aimed specifically at spotlighting just how Latinos impact the United States of America.

In a recently released trailer, “The Latin Explosion: A New America,” is a documentary that brings together some of the hottest and well-known Latino celebrities in music, television, and film within the country and asks them: what it means to be a Latino in the U.S.? And the obstacles they have had to overcome.

Within the trailer, singer Gloria Estefan describes how at the start of her career she was advised that she should change her name because it would be too complicated to pronounce.

In candid interviews, stars like Cheech Marin, Rita Moreno, Shakira, Romeo Santos, and many more with the stars above take part in this project and also share or discuss their own personal experience within the entertainment industry in the U.S.

The documentary also will depict major historical events within the industry that had a large effect on impacting the Latino community today.

Tommy Mottola, a well-known Music Producer who has a hand in launching some of the music industry’s most popular stars like Marc Anthony, Mariah Carey, as well as Lopez, Martin, and Shakira served as the documentary’s producer.

In an interview about the documentary, Mottola said that a documentary has “assembled the largest array of Latino superstars ever in a film telling a powerful story of their history and immigration, politics, and rise from a small minority population to the most critical demographic in the United States.”

The documentary couldn’t be coming out at a more important time. With certain political candidates shining a negative light on the Latino community, the film can be a powerful tool in showing other groups outside of Latinos just how important and impactful the community is.

“Latinos spend $1.3 trillion a year, making them one of the most powerful groups of consumers today,” Mottola added, noting that Latinos are known as one of the biggest consumer demographics within the United States.

In the trailer it is noted within a caption that “In 1950 1 in 50 Americans were Latino,” but “By 2050, it will be 1in 3,” which is a statistical prediction that has yet to be discredited, but continues to gain backing.

And being a community believed to growing, it is quite possible when Mottola explained that Latinos will also have a huge impact on the upcoming 2016 presidential election once again. Latinos presented a strong presence in the 2012 election, and not every Latino voted then.

Latinos may not just only impact the 2016 elections, but could be more of a presence down the road in politics.

“There is no doubt in my mind that by 2025 we will have a Latino president,” Mottola said, and he may just be right.

”The Latin Explosion: A New America”, narrated by John Leguizamo will air Nov. 16 at 9 p.m. ET on HBO and HBO Latino.