SOTU 2015: The Days after the President’s State of the Union address

SOTU 2015: The Days after the President’s State of the Union address 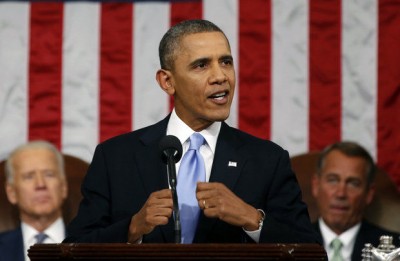 Yesterday and Tuesday evening, Twitter, Facebook, and any other form of social media was abuzz with chatter. No, there wasn’t a celebrity arrest, marriage, or pregnancy but talk was on the 2015 State of the Union address. And this SOTU address is sure to be one of President Barack Obama most memorable one.

SO, why is it going to be one of President Obama’s most memorable SOTU address? Well, it simply took a round of applause from a selective few in the audience to bring forth one of the best sound bites to ever be delivered by the President.

As President Obama was into his address, and was speaking with an affirmed confidence, he seemingly took his stance to any opposition he may face and said, “I have no more campaigns to run,” which led to some Republicans responding with a series of applause.

Waiting for them to quiet, and with a boasting smile, the President promptly responded, “I know, because I won both of them.”

Now, the response has ignited the world of social media with memes and various forms of funny and entertaining images highlighting that very moment. However, what should be looked at is the regard to what was and wasn’t talked about.

In this SOTU, the president didn’t have to say much in-regard to immigration reform because he said all he needed to say when he released his executive plans on immigration policy back in November.

Addressing Congress, the president remained firm on his decisions that have been made recently saying, Congress shouldn’t try “unraveling the new rules on Wall Street, or re-fighting past battles on immigration,” and if they do the president added, “if a bill comes to my desk that tries to do any of these things, it will earn my veto.”

While he didn’t talk much about immigration, or didn’t go into depth in-regards to his plans offering free tuition into two-year colleges, the president didn’t have to really but had to show that he will stick to his plans no matter the road block he may face.

However, what did the other side of the political spectrum have to say?

Yesterday—the day after the SOTU—Republicans failed to address anything that was barely address in the SOTU. What does this mean? In their official response, Republicans did not comment on either the immigration executive action or the plan to offer citizens two free years of college.

However, Republicans did say they would address the immigration changes in their “Spanish” version of SOTU response. But that didn’t exactly work out.

Senator Joni Ernst, R-Iowa, gave the English response with absolutely no mentioning of immigration meanwhile Carlos Curbelo, R-Florida, who was selected to give a Spanish translation of the response did mention immigration and stated how Republicans wanted to work with the president to fix the immigration system.

There are numerous issues with the ploy used by Republicans for their response to the SOTU.

On one hand, the party is sending mixed signals by having no mentioning of immigration in the English speech but then having it in the Spanish version. What this does is show that there may be desperation within the GOP to attain the Latino vote, but not enough to fully embrace what they may have to do in order to earn it.

To earn the Latino vote, the party may want to consider being more accepting of the fact that there are immigrants in this country and they aren’t the villain or interlopers that certain news media that represents the party make them out to be. A large portion of the immigration community is of Latin descent and Latinos may actually want better reform than what the party is willing to acknowledge.

Another issue regarding the two speeches is that it shows a division; a division that may be within the party among politicians and the people themselves. By having one speech in English, with different information being heard primarily only by English listeners; then having another speech in Spanish, with different information that will only be heard by those who understand Spanish you’re presenting two very points of view. Two different points of view present a division within a party that’s supposed to consist of people with shared political views.

In a sense multiple responses is good thing, but not when it is intended to be a response representing an entire party.

Considering that the speeches were noted as being “The Republican” response, their response should have been similar in order to present a unified party to potential voters. With the different messages, it shows the complete opposite. The Republican response to the SOTU doesn’t show a party that is unified but a party that is being deceptive when it comes to revealing what their true interests are.