The New GEORGE LOPEZ in “Lopez,” for TV Land

The New GEORGE LOPEZ in “Lopez,” for TV Land 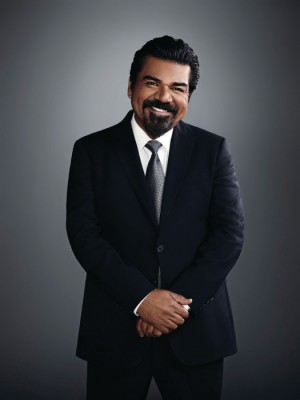 Originally published in the May 2016 issue of LatinTRENDS magazine

If you think fame and fortune will solve all of your woes, just ask George Lopez. But you don’t have to put on your best high heel sand trot over to Madison Avenue’s Lotte New York Palace Hotel in a frenzy like I did. In fact, you would probably prefer hearing Lopez‘s story from the comfort of your own home, not a hotel room set up like a television studio, with lights in your face and a sudden stutter wrestling your tongue. (I’m told it’s normal to be nervous when you finally meet your heroes.)

Instead, grab a drink and your favorite soda and park yourself on the sofa, because George Lopez has a new show on TV Land. Yes, like his other material, this show is semi-autobiographical, but that doesn’t mean you know exactly what to expect. This is “Lopez,” a half-hour comedy starring and executive produced by George Lopez himself. And “Lopez” is about George Lopez now.

“Lopez” explores George Lopez as a man who’s made it: He has the mansion, the adoring fans, the fancy clothes. He’s living the pie-in-the-sky American dream. Yet, he still struggles because it seems the American dream cannot be fully achieved without white privilege. He doesn’t fit in with his old barrio buddies in the San Fernando Valley.

Even if, culturally, he’s a fit, money has changed him. But Lopez doesn’t fit in with the predominantly white, upper-class Hollywood crowd,either. Even though, it’s where he now “belongs” due to his financial position,they don’t accept him and he doesn’t exactly like them. As a brown-skinned Latino from a working class background, wealth alone can’t buy Lopez the respect he wants from fellow parents and teachers at his daughter’s private school. People still confuse him for the valet driver.

Does this make Lopez mad? Sure, but George Lopez being George Lopez, he can find the humor even in racism and classicism, and that’s the big selling point of the show. If those kinds of jokes make you uncomfortable, this isn’t the show for you.

It’s not all laughs, though. During our interview (which is available online) the actor told me that he thinks “Lopez” can add to America’s conversation about race. Whether you end up enjoying “Lopez” or not, people are already talking about it. Just google“George Lopez TV Land,” and you’ll end up with half a million search results. In a social and political climate in which #Black Lives Matters has taken off, why can’t#Brown Lives Matters take off, too? And why can’t “Lopez” be the show that unites Latinos and non-Latinos across the Twitter verse?

To watch my interview with George Lopez, see below.

LAFOURCADE Is Brave Enough to Bare Her Soul
SELENA GOMEZ CANCELS TOUR DUE TO EFFECTS FROM LUPUS
Translate »
%d bloggers like this: