Would you have ever guessed that the inspiration behind 007’s James Bond was a Dominican man? Probably not.  Lawyer and historian, Daniel J. Voelker, aims to prove otherwise in a new article he penned, Will The Real James Bond Please Stand Up, which states that the Dominican socialite, Porfirio Rubirosa, was Ian Fleming’s muse for creating the world renowned Bond series.

Porfirio Rubirosa, aka Rubi (January 22, 1909 – July 5, 1965) was a Dominican diplomat, race-car driver, and polo player. He was an adherent of the dictator Rafael Trujillo, and was also rumored to be a political assassin under his regime. Rubirosa made his mark as an international playboy, for his jet setting lifestyle, and his legendary sexual prowess with women. Among his spouses were two of the richest women in the world.

Amongst the women he attracted were heiresses and movie stars. His unbelievable track record of romantic alliances was unparalleled, with links to the likes of Marilyn Monroe, Ava Gardner, Rita Hayworth, Joan Crawford, Judy Garland and even Eva Peron and Zsa Zsa Gabor.

He was something of a dare-devil, enjoying fast cars, skiing, flying, playing polo and having dangerous liaisons with married women. Rumors of his manly sexual prowess in the bedroom always followed him around.

As a matter of fact, his mucho endowment below the waist eventually prompted waiters in France to refer to colossal peppermills as “Rubirosas.”

His extraordinary life began in 1909, when he was born into an upper-middle-class family as the third of three kids in San Francisco de Macoris, Dominican Republic. 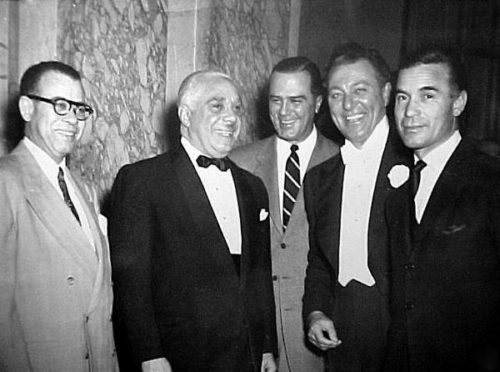 It was often rumored that his activities weren’t exactly on the right side of the law,  He was thought to be involved smuggling and several people had mysteriously disappeared – something that the police never confirmed or verified. He did have a number of unsavory connections. Despite his extravagant way of life, he was born into humble beginnings, Porfirio simply went where the money was and married it. 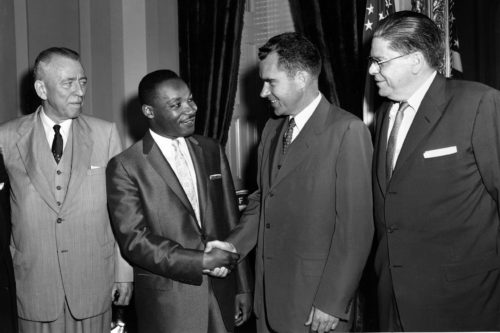 Two of his five wives were, at the time, the wealthiest women in America –  heiresses Doris Duke and Barbara Hutton. When he was divorced, he did extremely well with the financial settlements. Doris Duke was Rubirosa’s third wife. She was ecstatic about marrying him that it’s said, she paid wife number two, a French actress, one million dollars to release him. Yet she divorced him because he was still dallying with his first wife. Porfirio, just couldn’t stop. 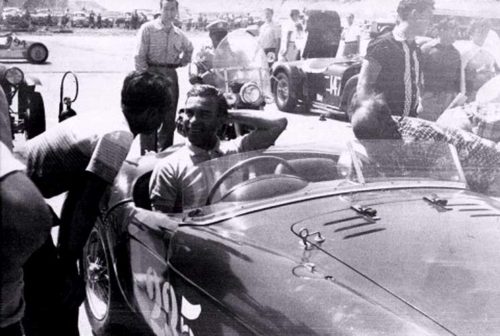 His next heiress wife, Barbara Hutton, made Rubirosa’s 5th wedding certainly had fun in those days. He was romantically involved with almost every well-known actress of the day. It’s said that he had been to bed with thousands of women.

His untimely passing at the age of 56 happened when was behind the wheel of one of his Italian sports cars. He died after crashing his luxurious Ferrari 250 GT into a massive chestnut tree in the early morning after celebrating the night away at a Parisian nightclub following his team’s polo championship. 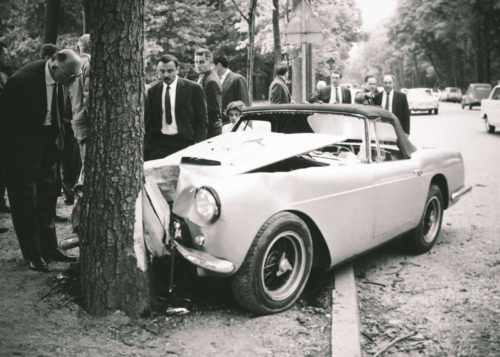 Rubirosa is widely speculated to be the inspiration for the Dos Equis “Most Interesting Man in the World”, a famous TV ad campaign featuring an older, multi-talented gentleman known for his outrageous, typically unfathomable achievements. 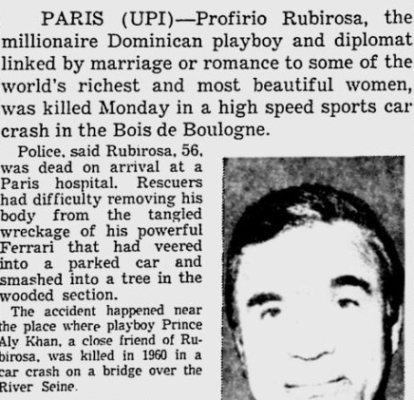