The Trouble with Green Cards

The Trouble with Green Cards 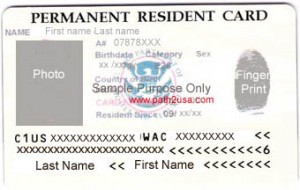 Within the United States the issue of immigration has always been a hot topic constantly debated amongst both politicians and the people of the country itself. While citizens find immigration to be problematic to their daily lives none bother to realize the issue of immigration for the immigrant themselves. A nuisance for many immigrants who are moving to the country in order to better their lives and embrace the “American Dream” many are seeking ways to avoid being stratified as lesser citizens because of their immigrant status by attaining their Green Cards which would make them true American citizens. However, there is one group which is finding it difficult to do so.

According to Latino Activists, more than 8 million permanent residents of the U.S have not become a legal U.S citizen and continue to go unprotected against aggressive immigrant policies that are slowly rising in the country. According to Attorney Juan Jose Gutierrez, also an immigrant rights advocate in Los Angeles, “Every person who qualifies to be a permanent resident does not apply for citizenship should be aware of the damage he’s individually causing the entire immigrant community by not exercising his rights as a citizen.”

On the issue of Latino immigrants’ not seeking their green cards Gutierrez adds, “if all those who can get their citizenship would vote, with that power we could put pressure on the politicians to attend to the most pressing demands of our community such as fair and comprehensive immigration reform.” However, attaining a green card isn’t as simply as attaining a library card. Despite fears of being persecuted due to harsh immigration bigotry, some Latino immigrants may find the process itself difficult and costly.

“With the economic crisis everything went downhill, the rate of naturalization was cut by more than half because people don’t the money to pay for the process, which the government has made more expensive,” said Antonio Gonzalez, President of the William Velazquez Institute, who tells of one problems faced by immigrants seeking citizenship. Gonzalez also describes another issue which lies in the government itself, “Both the government of George W. Bush and the one of Barack Obama have not allocated funds to get strong campaigns going through organizations so that people apply for citizenship.”

Francisco Rivera, President of the National Central American Roundtable (Spanish: Mesa Redonda Nacional Centroamericana), believes “it’s necessary for low-income families to know that they can fill out a request to be made exempt from paying with Citizenship and Immigration Services and if they can prove that they are low-income category they will not pay the $680.” To be better informed on the process of attaining legal statues, Rivera advises immigrants to attend citizenship fairs that are organized by the National Association of Latino Elected (NALEO).

According to the Department of Homeland Security, out of the 12 million foreign residents living in the country 8.2 million of them are eligible to apply to citizenship. Lizette Escobedo, the National Director for Civic Engagement with the National Association of Latino Elected and Appointed Officials Educational Fund, supports the numbers and states along with them that of the 8.2 million “44% were born in Latin American, and in California in particular there are 3.3 million permanent residents of whom 2.3 million can already apply for citizenship.”

With no end in sight for the immigration debate to be settled, despite some recent changes being made by the Obama administration, the only hope some immigrants in the country have is trying to attain green cards. And even when trying to do so the process in itself is also problematic due to many road blocks, both financially and politically.

How to become Unbreakable in 3 easy steps!
Got Down Time at Work?
Translate »
%d bloggers like this: