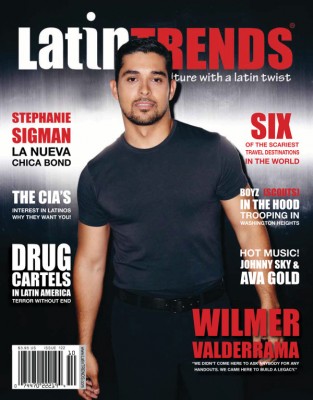 Wilmer Valderrama heats up LatinTRENDS’ cover. In the interview, Valderrama gets fired up about his acting career, immigration, his will to rise above challenges and uniting Latinos in the U.S. “It’s important that all [Latinos] unite and understand that there is a different movement happening. We are part of the engine in this country just like everybody else, and that, to me, is number one.”

“It’s important that all [Latinos] unite and understand that there is a different movement happening”.

The CIA is on the hunt for Latinos. In this month’s issue, the CIA’s fourth ranking official, Carmen Middleton, who happens to be a Latina, explains why the CIA is committed to hiring more Latinos. “As the Hispanic population grows in the United States and the Hispanic representation in federal service, as well as in the Agency, is not keeping pace, the disparity is becoming quite stark.”

There is a new chapter in the history of the Boy Scouts of America. “In 2001, the Supreme Court ruled that the organization had the right to exclude homosexuals. The Boy Scouts of America, which has over 3 million scouts and 1.2 million adult volunteers, erupted in turf wars.” Antonio Camacho, Scoutmaster Troop 729 based in Washington Heights describes how his troop shifted their efforts toward gender neutrality and weathered the storm until the organization lifted the ban.

Meet opera singer turned bachatero Johnny Sky, and multi-talented instrumentalist Ava Gold—two of the hottest artists emerging today. LatinTRENDS explores their unique styles and musical inspirations. “I thought it’d be really cool to write a song about my parents—all the struggles and sacrifices they had to make in pursuit of ‘The American Dream,’ but all the while never forgetting where they came from,” says Ava Gold.

This month’s health and wellness advice offers “5 Reasons to Start Daily Meditation Practice,” “Food for Glowing and Beautiful Skin,” and “5 Latin American Ingredients You Need In Your Kitchen This Season,” plus an interview and a tempura avocado recipe from celebrity chef, Cheo.

Download the LatinTRENDS app on all iPhones, iPads and Androids via Pocketmags.com today!

Our vision is to be the leading platform for the bicultural in all cities throughout America.  Armed with a constant and never-ending quest to bridge cultures and expose a new generation of talent before anyone else.