Did they or Didn’t They? Pt. I: The Latino Voting Dilemma

Did they or Didn’t They? Pt. I: The Latino Voting Dilemma 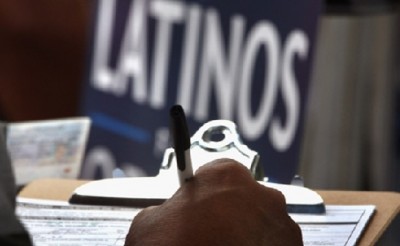 If you didn’t notice why your children or local schools were closed or why there was a flurry of red, white, and blue due to the flying of countless American flags or why your Facebook is abuzzed with “Get Out and Vote” well you should know it was Election Day. Yesterday, the 2014 Elections were held across this country and would determine how the inner-workings of our country’s congressional atmosphere would look either Red (for Republican) or Blue (for Democrat).

While I do believe in the power of the vote and a need to be informed political, I wasn’t at all really concerned about voting on Election Day, and it’s a feeling that most Latinos may have shared.

As LatinTRENDS has been covering, Latinos are considered the go to group constitutes to sway in order for any politician to stay in power or get into a coveted position. But this last year there has been a very dissatisfying approach towards the community by politicians on both political sides. However, despite this lack of appeal, it seems that one political party may still have an edge.

According to a survey by the Pew Research, among the registered Latino voters there is still a preference to vote Democrat. However, for this year’s election the number may be smaller than those in gathered in the past. In 2010, it was estimated that 67% of Latinos voted Democrat but for today the number is an estimated 57%

But what of the Latinos who see no point in going to the voting booth at all?

Among Latinos who do not feel supported by the Republican or Democratic party, 35% have said that they are not swayed by either side. This recent number has increased since 2012 where it was estimated that only 23% were not interested in voting.

This year there is an estimated 25.2 million Latinos who are eligible to vote in the midterm elections. According to the Pew Research, the current estimate has increased 3.9 million with one in 10 voters being of Latino descent. With the Latino community becoming more and more prominent in the country, any politician should see that this is the community to reach out to and try to appease because they are one of the largest population within the country.

However, over the last year with the rising hostile felt by the aggressive response to immigrants, the lack of pushing forth immigration reform, and discrimination towards Blacks and Latinos there was real significant approach to try and better or aid the community.

According to the National Association of Latino Elected & Appointed Officials (NALEO), there was an estimated projection of 7.8 million Latinos who went to the voting booth. While this predication is an increase from the 6.6 million who did vote in the 2012 elections, it’s not that great of a number considering it only means that 30% of Latinos who were eligible to vote did vote.

Early it was mentioned how the current political climate regarding immigration in this country may have kept Latinos from the voting booth, and this notion isn’t one of mere prediction.

“One of the things we came across most was people asking: Why should I even register to vote if they don’t care about us?” said Celina Villanueva, Manager of the New Americans Democracy Project at the Illinois Coalition for Immigrant and Refugee Rights.

Commenting on what most canvassers have encountered in Latino and immigrant neighborhoods throughout the Chicago area, Villanueva also added that there wasn’t a “lack of interest,” among Latinos “but also a really strong sense of frustration that Latinos are completely ignored.”

According to Puente Arizona, an immigrant civil rights group, with the hostile climate immigrants feel and a sense of being let down by President Barack Obama who postponed any action regarding immigration until after the elections has suggested that Latinos punish Democrats by sitting out the elections.

But the issue of immigration isn’t just one problem that may have kept Latinos from voting. Another issue that is strongly looked at among Latinos is the matter of healthcare and minimum wage in this country.

We are still awaiting this election’s findings to see how many Latinos did turn out at the voting booths.

I must admit, I didn’t see the point of voting yesterday. I just thought it would be another wasted vote on a politician whose attempt at being a snakeoil salesman failed this year. However, despite this notion I had to vote. I had to look at the candidates presented before me and pick which lesser of the evils gets my vote. While voting may not seem to always work, the act only allows you to argue and demand something be done because you took the time to cast your vote.