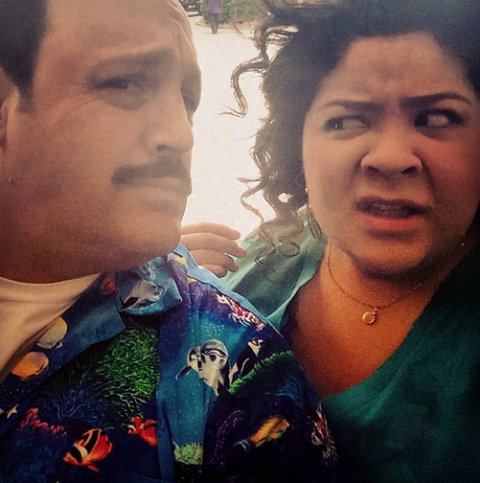 Funny man Kevin James should honestly thank his Latino co-stars for helping his movie, ‘Paul Blart: Mall Cop 2,’ take the number two spot with $24 million this weekend in the box office even with critics thrashing the movie with horrible reviews.

The beautiful Peruvian and Puerto Rican Daniella Alonso, who plays Divina – a strict and bossy Los Vegas resort general manager – said in an interview with Fox News Latino that “it’s so hard keeping a straight face” while working with such a great and talented cast.

Yet the movie received the worst reviews from websites like Rotten Tomatoes, who gave it zero rotten tomatoes (100 tomatoes is the best and zero is… well, you know). Movie critic Christy Lemire of RogerEbert.com crushed the movie when she wrote that it is a “massive waste of time and money” and “worse than the worst movie you’ve ever seen.”

What the 42-year old Lemire didn’t get is that this movie is not for her; it’s for a targeted audience with a sense of humor. Ok, low blow. But this really silly PG movie is for a younger generation that finds a guy getting hit by a car, a person falling or some weird stuff like that extremely hilarious. In other words, it’s a family movie targeted for teens and young children.