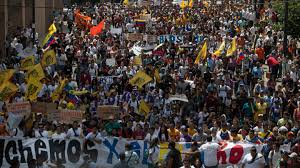 It is unfair that people have to go to extreme lengths to get their point across and try to do something that creates change. It is unfair of how some country’s governments are run to the point where people are almost forced one way or another just to survive. Yet, this is the reality in some countries where surviving is a struggle on a daily basis for some people.

The media gets so consumed with presenting current events that sometimes, certain events do not even get enough coverage, so people rely on social media. One particular story is about Venezuela and all of the protests that have been recently happening in this country.

A group of students are protesting in Venezuela who is demanding that the United Nations send a mission to Venezuela; essentially help to take control of the people and bring order to the country.

The most recent incident involved these students being arrested for protesting, yet, like many others, the students will keep fighting back. More of these instances have happened as early as February 12th of this year. Combined deaths and arrests show that the people keep fighting and keep pushing the government to create change to their country.

Read more about the Venezuela protests in the April 2014 print issue of the magazine as well as on our website.

Cinco de Mayo Flub: Latinos Upset with MSNBC program over insult
Could Homeless Youth be on the rise in New York City?
Translate »
%d bloggers like this: