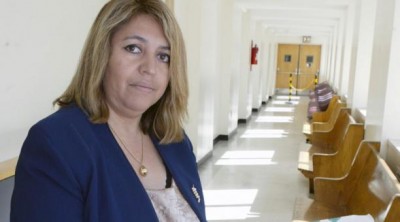 Just two weeks ago, Queens made history after the November 2014 Elections when voting in the first South American Latina judge from Ecuador. Being the first South American elected-judge, Carmen Velásquez attributes being voted into the Queens Supreme Court of the 11th judicial district of the New York Supreme Court to her humility and determination which was nurtured into her by her upbringing and Latino roots.

“As an Ecuadorean, I feel very proud, but most of all as a Latina,” said Velásquez, after her November 4th electoral win where she obtained 131,926 of the votes on the Democratic ballot, “I never forget where I came from.”

A native of Ecuador, Velásquez was born in Quinto, the capital city of the South American country, but was raised in Portoviejo before immigrating to New York when she was 14.

At 14-years-old, along with her mother and two sisters, Velásquez entered the country with very little but due to her mother being a “positive and happy” person she would come to learn how to face any challenge and be able to “climb up the hill” to overcome them.

Knowing no English and having very little money didn’t stop Velásquez. Instead, she pursued her education with such reverence and determination—along with some grants to aid her—and was soon able to obtain an education and enter into the world of Law.

Receiving her B.A. from John Jay College of Criminal Justice and then her Juris Doctor from Temple University, Velásquez would eventually find herself back in the courtroom in Queens.

Since 2008, Velásquez has served in Queens Civil Court. Her tenure there eventually attracted the attention of Queens Democratic leader Representative. Joseph Crowley and Assembly Member Michael DenDekker who supported the newly-elected judge during this year’s election.

“It all takes time, and it must be taken step by step. It took 10 years of hard work to become a judge for the Supreme Court. That is why I am so grateful that [Crowley and DenDekker] trusted me and backed my candidacy,” said Velásquez, alluding to the long and thorough process aspiring judges have to go through in order to be nominated into the Supreme Court.

Although Velásquez is the first person from South America to become a judge within the 11th Judicial District of the New York Supreme Court, Diccia Pineda-Kirwan was the first Latina to become a judge in the Supreme Court for Queens County. From the Dominican Republic, Judge Pineda-Kirwan has served the district since 2009. Before Velásquez and Pineda, Judge Jaime Rios was the first Latino from Puerto Rico to be elected into the Supreme Court back in 1995 serving in the 2nd & 11th judicial districts before retiring in 2013.

Still, the accomplishment of Velásquez is something to be impressed by. An immigrant to this country, Velásquez shows just what you can do if you push yourself to attain what you want for your life.

Expected to assume her new position on January 2nd, Velásquez has so far begun to crave her legacy for future hopefuls to look up to. When acknowledging her legacy so far, Velásquez hopes to be an influence to the younger generation.

“I feel that I opened doors so that those who are coming behind me can follow my example, study and prepare, so that they can have better opportunities.”

No Fun Dangling From One of The Tallest Skyscrapers In The World
GIANCARLO STANTON SCORES BIGGEST BASEBALL CONTRACT EVER
Translate »
%d bloggers like this: