The Prison Pandemic among Youth

The Prison Pandemic among Youth 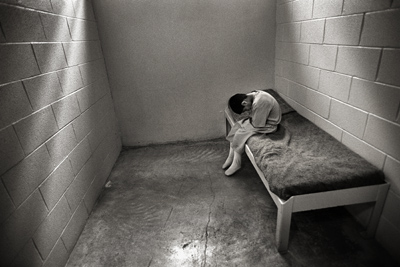 The general idea of the prison system is that it is a place where those who stray away from following the social norms of society and commit crimes go to in order to reform. However, for some who do go to prison the very structure no longer follows that intention. Now, as place where crime and violence exist prisons may not truly reform those who enter. In fact, it can be the very opposite.

According to a story on NPR, prisons are a place where some “criminals who go to prison don’t come out reformed. They come out worse,” because the co-habitation of harden criminals with new delinquents acts as a form of school for the younger prisoners.

“You come in [to prison]. You’re 16, 17, 18 years old. You’re looking around and you’re thinking, ‘Listen, I can learn from these seasoned veterans.’ And that’s exactly what you do,” describes Donald T. Hutcherson II, a professor of sociology from Ohio University in Lancaster, “Basically, you are spending a lot of time around other criminals, seasoned veterans who know the lay of the land, and they can teach you the mechanisms—ways to get away with crime.”

Researching various data in the U.S. government’s National Longitudinal Survey of Youth and conducting interviews with those who were imprisioned, Hutcherson discovered that for some younger and influential prisoners they aren’t being reformed away from committing crime, but possibly becoming more educated in furthering their criminal activities. Because of this climate, prisons are now also known as a place of business.

While prisons may be seen as education for future offenders, there is one element that is generally overlooked as being a contributor to furthering the progression of young criminals: those who control the prison.

One prison known for being a hotbed of violence and having an issue with prisoners and those who are in-charged with watching them is La Roca—Spanish for the The Rock—which is a known, widespread nickname for Rikers Island.

For Frank Casco, a 24-years-old El Salvadoran-born but New York City-raised man, his experience in Rikers Island permitted him to reform unlike some others who have been imprisoned.

The violence Casco experienced on Rikers Island back in 2008 when he was 18-years-old would keep him from pursuing a life of crime. However, it wasn’t only the violence he encountered from his fellow cellmates but from the prison staff themselves.

According to City Comptroller Scott Stringer Rikers Island, the second largest penitentiary in the country with a population estimated at 12,300 inmates, is a place where a “culture of violence” exists.

Casco recounts how this culture of violence does exist within in Rikers Island when his cellmate was approached by a prison guard. On his first night when in the prison, Casco remembers how his cellmates—a young Black teenage boy aged 16—was far too nervous to rest so he paced back-and-forth. Bothered by this, a prison guard ordered the teen into a blindspot from the prison cameras and assaulted the boy.

“Without explanation, the guard knocked the young man out with one blow,” Casco remembers, “At that moment, I knew that I was in hell.”

Assault by prison guards upon inmates is a rising issue within Rikers Island.

According to Comptroller Stringer, over the last few years personal injury lawsuits filed by inmates throughout prisons in New York City have soared. Currently, the Department of Corrections faces an estimated 2,245 legal claims for physical injuries.

The increase of assaults is more evident within specific units located inside Rikers Island. Within the Otis Bantum Correctional Center located in East Elmhurst claims of physical injuries rose an estimated 174% within the last 5 years.

“The culture of violence detailed in recent reports on Rikers Island has made it clear that we are potentially facing a humanitarian crisis in our city’s largest jail,” Stringer described in a statement he released to the press, “Reducing violence in our jails is critically important,” and for some inside prisons the way to protect themselves from violence is by joining a gang.

While at Rikers Island, Casco describes that the one thing that kept him safe from being beaten by fellow inmates and prison guards was by alleging himself with the Dominican gang Patria. A gang he had familiar encounters due to growing up in Rockaway, Queens where he considered some gang members his brothers.

“My protection was ordered from the street. At La Roca, a Latino alone is a dead Latino,” Casco explains, describing one method in-which youth could further progress into crime.

While the purpose of joining up with a gang may be safety and to procure necessities that are not permitted inside prisons. Young offenders find their place within gangs by earning their way. Casco mentions how from food to drugs to pornography are considered currency within prisons.

“Women bring in the drugs, and give it to their men during their visits. Rikers is not impenetrable,” said Casco, talking about how some paraphernalia like food, cigarettes, drugs, and etc. may enter prisons.

But the one main reason as to why young offenders join gangs should not be forgotten: safety. Joining a gang is to not only survive other inmates, but the infrastructure involving prison guards and the abuse they may face at their hands.

While in Rikers, Casco described how he was at the will of certain guards and spent more than the year he was supposed to in prison because of a prison guard. According to Casco, his court hearings regarding his release were postponed five times due to a conflict he had with prison guards.

“If you are supposed to get out and a guard doesn’t like you, he will find a way to get you in trouble so that you have to stay longer. High-ranking officers look the other way.”

According to Comptroller Stringer, the issue with physical assaults in Rikers is an important issue because “for taxpayers who are on the hook for millions of dollars in settlements and judgments every year.”

Over the last five years, there was an estimated 34% increase in-regards to the indemnities used against claims made by inmates. Within the 2011 fiscal year there was an estimated $8.5 million given out due to claims. According to Comptroller Stringer, he predicts that over the next few years there will be similar expenses.

But how do you bring an end to this culture of violence within prisons?

How do you ease the cost of burden felt by tax-payers?

Rather than try to solve the problem within prisons look to solving the problems located outside.

At 17-years-old, Casco was arrested for vandalism linked to graffiti and spent eight months within the Bronx’s Horizon Juvenile Center. Already considered a delinquent, Casco is viewed by most as a lost cause. Because of this stigma placed upon him it led to him being wrongfully imprisoned in Rikers in the very first place.

Placed on probation for his vandalism charge, Casco found himself in trouble when he went back to Far Rockaway High School and was suspended. When a security guard informed him that he was going to write a report that would qualify him as probation violator and see Casco returned to jail he panicked.

According to Casco, he begged the security guard to not to report the incident that led to his suspension. In his frantic state he at one point grabbed the guard’s notebook.

“He became aggressive and pushed me. Without thinking, I replied with the same action, and he punched me hard on the mouth,” Casco retells, “The fight was enough to send me to Rikers until they could locate the security footage that would reveal that he started the fight.”

By putting in solutions within communities similar to the one Casco and many other young individuals live in you lessen the trend of youth falling into crime and becoming social outcasts therefore they have no other solution but to stay involved in crime. By creating social programs that cater to promoting good values, exposure, and sources of inspiration it cuts down youth becoming lost within the prison system.

As a young man Casco took to graffiti. While it is deemed vandalism to most, graffiti in its own unique way is an outlet of creativity. If more outlets that are deemed favorable are presented and encouraged to the youth it could possibly lessen the rising number of those falling towards crime and falling into prison.

While some become harden criminals after their prison stay, some do not. Casco is someone who broke through that mold. Declared innocent and released, Casco left Rikers and returned to school. Once he finished high-school and studying auto-mechanics, Casco hopes to complete his short-term goal which is to enroll into college.

“There is a before—and an after—Rikers,” said Casco. “The horror of that place changes you whether you want it to or not.”

But why should someone who is on the verge of ending up in prison have to experience it in order to avoid it? By tending to the community outside of prison, it can hopefully neutralize the cost of burden generated from the conflicts within prisons. By offering more programs—like the Boys and Girls Club of America—in neighborhoods in need of them you can keep youth from embracing a life of crime.

Getting an Education Should Not Be a Burden Because of Money
How Do Women Cope in a Male Dominated World?
Translate »