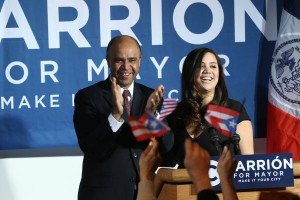 On February 26, 2013, before a rally of a hundred supporters in the Bronx former Bronx Borough President Adolfo Carrión announced his plan in running for Mayor of New York. Launching his historic bid and running as an Independent, Carrión would become New York’s first Latino Chief Executive.

With endorsements from the Independence party and known as being socially progressive, Carrión promises to help reengage all New Yorkers who feel disconnected and discouraged by the partisanship handlings motivated by special interests. A part of his campaign initiative, Carrión asks voters to help make the city ours—the citizens—again. Before his enthusiastic supporters Carrión was adamant about what he believed the city needed in their mayor.

A former New York City Public School Teacher, Carrión’s career in politics began on the City Council and eventually led to a two-term session as Bronx Borough President. For a time Carrión served as President Obama’s Director of Urban Affairs and is a former President of NALEO, which is the National Association of Latino Elected and Appointed Officials. His tenure as council member and borough president gives Carrión the experience to know how to make our city better.

“To make out city work we must invest heavily in building and rebuilding infrastructure that will make us modern and resilient, and will create jobs…we know that the best social program is a job.”

If Carrión become New York’s mayor he will be the first Latino mayor, a feat that is due to his parents and the inspiration they left on him.

“My parents came here in the 1950s from Puerto Rico, and like so many others then and now, they came looking to make a better life in a city where they believed you could work hard and enter the middle class in one generation.

Wanting to live up to the aspirations of his parents, Carrión’s campaign is trying to get others to back his cause. In 2009, only 3 in 10 registered voters went to the polls which were the lowest participation of New York voters since 1969. Carrión’s “Make It Your City” campaign is seeking to pull the five boroughs together and make this election truly resonate with voter participation. The lack of voters going to polls in 2009 may be due to something Carrión noticed.

“Too many New Yorkers feel that they are little more than an ATM for government. Large segments of our population are either being ignored or taken for granted by political parties and special interests. I’m running to change that dynamic and make New York more affordable for everyone who lives, works and runs a business here.”

Before the diverse crowd of Democrats, Republicans, and Independents intermingled with longtime supporters, Carrión ended his announcement on uplifting note.

“It’s time we made history together. It’s time every New Yorker had the confidence to stand up and say ‘This Is My City.’”