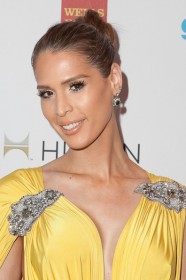 From September 15th to October 15th across the United States of America the country views National Hispanic Heritage Month. A month where we celebrate the very diverse and exuberant Hispanic culture and where we honor Hispanic figures that have made history by pushing the boundaries that were once placed on Hispanics in this country and afar.

Within the gay community there is one community that has aided in the push for gay civil rights in this country, and as the country is becoming more accepting of gays this group is now stepping out to fight for their very own rights. Trans-people are starting to push forth for acceptance and understanding, trying to correct the misconceptions that may be out there regarding the community. But today, hopefully, with influential people like Laverne Cox the world can begin to accept trans-people for who they are: people.

To help the world better understand trans-people there are several well-known trans-people in the Hispanic community as well.

A native New Yorker and of Puerto Rican and Venezuelan descent, Sylvia Rivera was a gay and trans-activist trans-woman. Founding member of the Gay Liberation Front, the Gay Activists Alliance, and the Street Transvestite Action Revolutionaries, Rivera was an advocate for gays and trans-people; she also helped gay and trans youth who unfortunately were caught in the criminal system.

In California the School Success and Opportunity Act is a law that grants students the right to participate in any sex-segregated school programs, activities, and athletics even if their gender identity does not match what appears on their school records. What this means is that trans-youth no longer have to feel they cannot participate within a particular sport because their gender on their records differ from what they consider themselves. This law benefits youth like Pat Cordova-Goff.

Despite being born genetically male, Cordova-Goff does not see herself as male and during her sophomore year of high school decided to embrace who she is and become the woman she wants to be. At 17-years-old Cordova-Goff is the face of the School Success and Opportunity Act–also known as A.B. 1266–and is one of the first trans student to be protected by this law that recently overcame a recent repeal attempt.

A softball player at Azusa High School’s Lady Aztec, Cordova-Goff reflected on her experience in an interview, “I will continue this season with a bow in my hair and Aztec pride in my heart. … Reporters will continue to incorrectly refer to me as ‘him,’ and people will not always understand or even want to understand. But I intend to take the field, and remain on the field. I will show transgender youth (and adults) out there that being happy is possible.”

Like Laverne Cox, reality star and supermodel Carmen Carrera has become an advocate pushing for tolerance and acceptance for trans-people in the country.

The New Jersey born star got her start on the third season of RuPaul’s Drag Race when she appeared as a drag queen contestant pre-transition. Despite always feeling and knowing she was a woman, Carrera didn’t come to full terms with that notion but decided to perform as a female illusionist. It wasn’t until after she appeared on Drag Race that Carrera made the decision to transition into a woman.

Since making the decision back in 2012, Carrera has used her celebrity status to help others within the trans-community. Carrera’s advocacy for trans-people began not only when she decided to transition but due to an incident with an episode of TLC’s Cake Boss where they were going to demean Carrera for being trans.

Since then Carrera has done countless interviews from CNN to the LA Times trying to enlighten others on what it means to be a trans-person. Carrera’s fame has garnered such a following that fans even tried to petition Victoria Secret to have her appear during its annual runway show. Her effort in fighting for trans-people rights has even awarded Carrera with a spot on the Trans 100 list.

This is just a small sample of influential trans-people who are constantly fighting for bettering the lives of others within their community. For transgendered people the world isn’t so accepting, there’s a lack of understanding behind why some may feel they were born in the wrong body. The lack of acceptance towards trans-people mainly comes out of sheer confusion and lack of understanding. With influential people like Cox and Carrera choosing to use their fame to inform others hopefully acceptance will be offered to the trans community.

Ricky Martin Reveals The ‘Most Difficult Question’ He’s Been Asked By His Kids
A Must-See @ MSG! What You Missed!