#myNYPD hashtag mishap: The Dangers or Benefits of Hashtagging?

#myNYPD hashtag mishap: The Dangers or Benefits of Hashtagging? 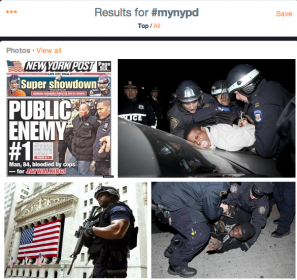 On Tuesday the New York Police Department learned a very valuable lesson about the world of social media: be careful of hashtag-ing and the dreaded hashtag hijackers.

In an attempt to get New Yorkers to show their love and support for the boys in blue through Twitter, the NYPD asked New Yorkers to post pictures of themselves with its police officers using the hashtag #myNYPD.

However, the kind request turned sour.

Doing as the NYPD requested, Twitter users did post photos of themselves with officers. But the photos were not of smiles or shaking of hands or hugs. A majority of the response to the hashtag was negative and showed law enforcement exhibiting police brutality and police misconduct.

@MoreAndAgain tweeted a photo of an officer pulling the hair of a person who appears to be placed under arrest with the following caption: “The #NYPD will also help you de-tangle your hair.”

It’s estimated that more than 110,000 of Twitter users responded to the hashtag. Hundreds of tweets posts contained strong images of police violence and incidents that will leave you cringing.

Meanwhile, @OccupyWallStNYC, one of the popular hashtag hijackers, took the moment to politically protest the NYPD and its incidents of police brutality.

“Free Massages from the #NYPD. What does YOUR Police Department offer?” @OccupyWallStNYC tweeted, along with a photo of officers detaining a man by holding his arms back as he seemed to be screaming in pain while atop a car.

“I kind of welcome the attention,” said NYPD Commissioner Bill Bratton on Wednesday, “We really broke the numbers yesterday.”

Bratton seemed unbothered by the negative tweets that continued for a good 24 hours after the NYPD invited submission. According to Bratton, the photos are nothing new because he has seen them before hinting that the photos are the problems of the previous administration that manned the NYPD.

Cities like Los Angeles at #MyLAPD, Chicago at MyCPD, and Albuquerque, New Mexico at MyAPD contained posts by Twitter users posting pictures of police brutality experienced in those cities.

In a tweet by user @70torinoman a photo of a Chicago police officer appeared to be readying a punch to someone who was holding. Attached to the photo, @70torinoman tweeted: “#myCPD extending his fist out to the community.”

Despite the backlash in New York City, and in other cities as well, the use of social media and the tag has not deterred the NYPD from wishing they never introduced the hashtag. A New York police spokeswoman defended the campaign in-lieu of the shocking photos showing officers in a bad light.

“The NYPD is creating new ways to communicate effectively with the community. Twitter provides an open forum for an uncensored exchange and this is an open dialogue good for our city,” said Deputy Chief Kim Y. Royster of the NYPD.

While the hashtag may have attracted some negative responses, not all tweets in the #myNYPD were bad.

In a photo post of a woman posing alongside three wide-smiled police officers, @poshwonderwoman tweeted: “(M)y photo from my ride along with the boys from the 90th pct.”

Meanwhile, another user @annuhk tweeted against the negative posts stating: “People are so lame, there’s a lot of good cops out there as well.”

The recent Twitter flub may not be a true flub depending on how you look at it. While the posts of law enforcement may not be ones that would make anyone truly smile, they are spotlight a trend amongst certain—not all—persons give some power.

The posts tell us two things: the affective use of using social media apps to announce injustice and abuse of power and sending this information to those in power and holding them accountable to make the necessary changes.

Social media apps are used by many, particularly Latinos and Blacks, but they aren’t being merely used for the simple selfie or facebook post.

In the recent protests seen in Venezuela, Governor of the state Mirana, Henrique Capriles took to his Twitter account to decry the comments made by Venezuelan President Nicolas Maduro that the protests were no civil in nature but a staged coup to overthrow his government.

Julia Moran Martz @snarkyvegan tweeted a very smart response when it comes to the practice of hashtagging when she tweeted: “Lesson number 1 about hashtags: just because you created one doesn’t mean you own it. #myNYPD”