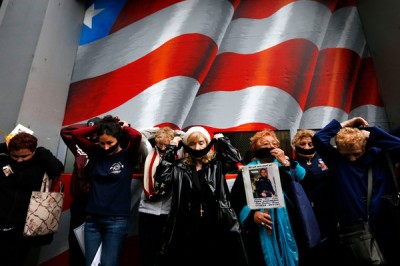 Ilia Rodríguez (2nd from the r.) stands with other protesters against the 9/11 museum.

On the morning of September 11th, 2001 a series of coordinated terrorist attacks took place involving planes that struck areas in Virginia at the Pentagon, a field located in Pennsylvania—where passengers of United Airlines Flight 93 were able to thwart the designated target—and in New York City which saw the fall of the World Trade Center Towers.

And now, after thirteen years a museum located in the spot of the twin towers will honor the nearly 3,000 victims who lost their lives on this tragic day. Containing shards of the fallen World Trade Center towers, exhibits containing 23,000 images immortalizing the day and those who suffered; 10,3000 artifacts collected from that day; and 2,000 recorded oral histories from families and friends talking about the lives of those lost.

Sadly, the museum’s opening is not without some controversy.

While the museum was dedicated to 9/11 on May 15th, 2014 and will be officially opened on May 21st, 2014, some relatives of the victims who were killed on 9/11 have begun a series of protests against the plan to store the remains of their loved ones inside of the museum. Some of the family members who are protesting are even asking President Barack Obama to intervene.

“We believe the remains should be returned to the World Trade Center site, but in a location that is separate and distinct from the Museum, akin to the Tomb of the Unknowns in Arlington National Cemetery,” said one of the relatives, in a letter to President Barack Obama, “For the approximately 1,100 families that did not receive any recovery of their loved ones’ remains, the repository of human remains in the Museum may be the closest thing they will have to a cemetery.”

Family members are planning to picket the site when the delivery containing the last unidentified human remains are transported into the museum. The protestors are requesting that the president force city authorities to investigate whether the museum would be a proper resting place for the remains. Some of the family members are asking for a “place of reverence” above ground as opposed to the designated location. The remains are to be housed in the basement level of the site.

However, location aside there is another key issue that many are finding a bit problematic in-regards to the museum. As a museum dedicated to honoring those who lost their lives, the victims and the responders, the mandatory $24 entry fee into the museum have some questioning why would a price be placed on a site of both dedication and burial for some of the unidentified remains?

“We will not rest until the remains are removed from this commercial venture,” said Norman Siegel, a lawyer for several of the relatives, “It is all being done as a lure to tourists who will pay to come and stand beside the only thing these families have left. It is macabre, and just not what we do with human remains.”

Siegel also added protests will continue even onto the opening to the public this Wednesday.

In response to the families who are protesting the museum, city authorities say that the reason why the remains will be located in the museum is so that officials from the medical examiner’s office can continue carrying out DNA testing. The basement level of the museum has been installed with a fully-equipped facility where the DNA testing of the collected remains could help identify the remains. The facility is said to be 2,500-square-foot and will not be accessible to visitors who are in the museum, however family members may schedule private visitations and will not be charged to enter the museum.

“We know how profoundly significant and sensitive this matter is to victims’ families, especially those whose loved ones have yet to be identified,” said the museum’s management, “this new repository will provide a dignified and reverential setting for the remains to repose—temporarily or in perpetuity—as identifications continue to be made.”

Meanwhile, city officials have commented on the protests stating that they have consulted with some of the victims’ relatives on the matter before commencing with the plan.

“Our administration has engaged the community of 9/11 families continuously since entering office four months ago,” said a spokesman for Mayor Bill de Blasio, “the de Blasio Administration is implementing the remains transfer plan it inherited from the previous administration.”

“I want the remains to be taken out of the museum and put somewhere where I can bring flowers and pray for him,” said Ilia Rodríguez, the mother of paramedic Carlos “Rey” Lillo one of the victims of 9/11 whose body was not recovered from the rubble.

“My brother was a brave man, and he died doing what he loved,” said Iliana Flores, Lillo’s sister.

Carlos “Rey” Lillo was born in Ponce, Puerto Rico and came to New York City when he was 14-years-old. On 9/11, Lillo, 37, had worked at Mount Sinai Queens for 17 years, and from several photographs taken on 9/11 he was captured rescuing victims.

Lillo’s family believes that he must have lost his life when he returned to one of the World Trade Center towers to continue helping others just before it fell. His body would never be recovered, and the only thing left of him from that day is the photos of him helping others. His mother and sister cherish those last photos of him helping people too injured to help themselves.

“We recognized him in several of the published pictures from the keychain with the Puerto Rican flag that he always carried with him. I am sure that he wanted us to see it so that we could feel proud of the humanitarian work he was doing,” said Rodríguez, while holding onto the last images of her brave son.

Along with several other families of relatives of 9/11 victims, Lillo’s family stood in Zucotti Park located near the museum holding a banner addressed to President Obama, who attended the museum’s inauguration ceremony, stating: “Please help us remove the remains of our loved ones out of the basement of the 9-11 Museum and into a dignified resting place at the 9-11 Memorial Plaza.”

The loss of a family member is devastating. The purpose of a burial at a cemetery or the construct of a memorial is to act as a place where those who continue to grieve can return to, dwell on the memory of those lost, say goodbyes, and know that when they depart from that area that place will still be there for them to go to and converse with the departed if need be.

The museum’s basement does not seem like a place that should contain the remains of fallen loved ones, in fact, it seems a bit wrong. However, the intention of the museum management and the officials of the medical examiner are noble. Wanting to identify the remains and give some form of closure to families to tell them is a good goal to uphold, but in the end the wishes of the whole—those who have suffered—should be taken into consideration.

Whether it is because of the location of the remains, or the sense the site of the memorial may feel like a tourist attraction the focus of the discussion should be geared toward the 1,500 or family members who were not able to find proper burial for their lost loved ones because there were no remains or there were too many to be identified. In the end, money or discussion amongst officials should take a step back and the attention should be geared on preserving a memorial to those who lost their lives.

Bringing Awarness to Autism
Am I Latino or Hispanic? What term defines your race?