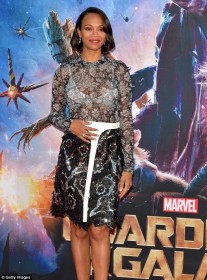 Dominican American actress and very pregnant Zoe Saldaña, Colombian singer Carlos Vives and Mexican musician Pepe Aguilar are among the 2014 Hispanic Heritage Awards recipients, which will be presented by the Hispanic Heritage Foundation during a ceremony on Sept. 19 at the Warner Theatre in Washington, D.C.

Carlos Vives will receive the Legend award, Pepe Aguilar the prize for Master of Arts, and Zoe Saldaña the Vision prize.

Also picking up the prize this year will be retired Puerto Rican major-leaguer who played baseball with the New York Yankees, Bernie Williams, and U.S. Congressman Ruben Hinojosa from Texas.

Each will be honored this year with the prestigious Hispanic Heritage Award, which celebrates the contribution Latinos make to America.

“The Hispanic community has made significant contributions throughout history, and we are proud to recognize the impact.” –Jose Antonio Tijerino

Since then, these prizes have been considered one of the greatest honors for Hispanics by Hispanics in the nation.

PBS will do a one-hour special this year on the prizes that will be broadcast nationwide on Sept. 29.